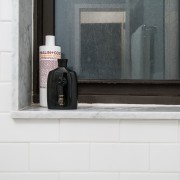 Megan and Ryan moved into their one bedroom co-op on Manhattan’s Upper East Side in 2012 after deciding that the apartment’s crumbling bathroom (an almost-dealbreaker that nearly scuttled the sale) would be their first renovation project to tackle as new homeowners. Megan, who works at the United Nations, and Ryan, who works in personal finance, knew they needed to replace the discolored tiles that previous owners had attempted to cover in paint. The vanity, a bizarre combination of sink overhang and unnecessarily narrow cabinet storage, was cracked and beyond salvageable. And the window, a great asset in a Manhattan bath, had been painted and sealed with uneven tile – more or less negating its value in the room.

The task ahead was clear, but Megan and Ryan felt daunted by the lack of information on bathroom renovation costs and didn’t know where to start.  Scroll down for the full set of before and afters, and a quick rundown of this Upper East Side bathroom renovation. Megan and Ryan set out to solve three main issues:

1. Tile work was a mess…discoloration, uneven grid work, and paint remnants meant everything needed to go.

2. Storage was non-existent. Did that vanity come off the factory line that way or was it hacked together at some point!? Unclear…!

3. The overall feel was out of sync with the couple’s style – a point of distraction in an otherwise crisp home.

The couple partnered with Alan Michael Carpentry to move in a new direction with three key plans:

1. Remove the tub and replace with a glass shower.

2. Achieve a clean and consistent look with beautiful materials and a crisp, light color palette.

3. Make the most of the small space with significantly expanded vanity storage.

Megan and Ryan consulted with Alan throughout the process to understand their options for better utilizing the space. Alan helped them select a new sink console with more accessible drawer storage from Pottery Barn to best fit the bathroom’s available width and depth. Alan also built a marble-topped shower ledge, partly to provide extra utility and partly to conceal piping that extended from the sink through the tub.

Megan ran with her love for Carrera marble, selecting four coherent but distinct tile types from Nemo: classic white subway tiles to line the full bath, Carrera pencil tile installed in an unexpected and especially beautiful herringbone pattern, and two Carrera hex tile picks in large and small sizes. A new medicine cabinet, a schoolhouse-inspired wall mount lighting fixture (both also from Pottery Barn), and a more central electrical outlet have made the room far more functional and stylish for the couple. Alan completed his work with Moen shower and sink faucets and a simple Kohler toilet. 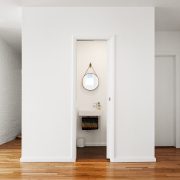 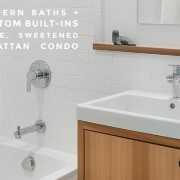 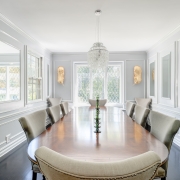 A Traditional House Remodel Offers a Dose of Modern